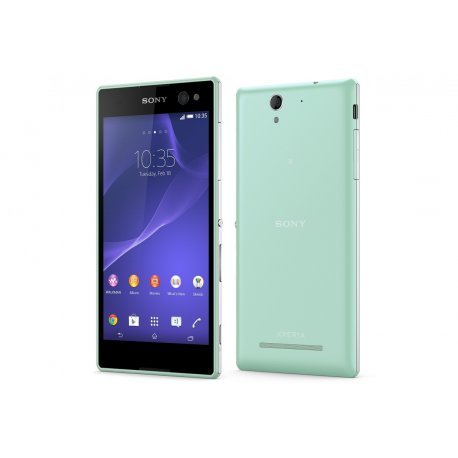 No introduction is required when the Sony is mentioned, they have taken the smartphone and turned it into something more, introducing their Xperia C3, a smartphone with selfies in mind. It is thinner and lighter, donning a 5.5” IPS display, with blazing performance courtesy of its Snapdragon processor and LTE modem. Whether you’re an avid selfie photographer or a performance buff, the Xperia C3 is here to serve.

From the smaller screens, onto something bigger, the Sony Xperia C3 dons a bright and powerful 5.5-inch IPS display. It is packed with pixels and it also introduce a larger surface area to make navigating between applications easier and smoother. It is 720p in resolution and is also loaded with Sony television features for greater viewing experience. Our phone is also a reflection of our choices and style, and the Sony Xperia C3 is thinner, and lighter than plenty of smartphones on the market. Its sleek and minimalist design radiates elegance, great for everybody. Weighing at only 150 grams, it barely adds any bulk, and only 7.6mm in thickness, it slides perfectly in your purse, pocket or pants.

The selfie craze has proven to be more than a fad, and Sony paid tribute to it by improving the camera on the Xperia C3. Now, selfies can be taken with greater detail, its 5-megapixel camera cooperates with its super-wide angle lens to ensure everybody fit into the picture perfectly. Say farewell to the dark pictures as they also included a soft LED flash.

The Xperia C3 is great for any kind of photography; its improved performance is contributed by the technology seen on Sony cameras. Included underneath its enclosure is their Exmor RS sensor, a sensor dedicated for mobile. This technology ensures each picture to be detailed with significantly low amount of noise no matter the conditions. Now every picture will be clearer, sharper and richer in color. Relatively thinner, there is no compromise in performance, the Sony Xperia C3 is fitted with a powerful processor by Qualcomm. This will provide a seamless experience for the user, enabling them to run a variety of applications all at once, shorten loading times of web pages and videos lag free. This Snapdragon Quad Core processor is also energy efficient, keeping it powered longer. Technology has gone a long way, and with the introduction of next generation speeds, users can now stream, download and obtain content from the world wide web, that much faster. The Sony Xperia C3 is fitted with an LTE modem, enabling users to exploit blistering Internet connection. Whenever powerful hardware is fitted into an enclosure such as the Xperia C3, people worry about the battery life. Sony solved this prevalent problem by introducing STAMINA mode. It will automatically turn off any functions deem unnecessary as well as turn off its bright display, while keeping notifications of your choice active.